Singular values of matrices show up in many different places, and studying them has significant importance in math. As per usual, it has a fairly simple definition but requires quite diffficult tools to analyze comprehensively. In this article I aim to demonstrate how would norm of a Gaussian random matrix behave and answer questions such as “How does it’s mean behave?” or “Is it concentrated around it’s mean?”. A crucial assumption employed on the entries of \(A\) is independence. Indeed, the results can be extended easily to subgaussians as well, however stating theorems with gaussians evaporates the annoying constants! Let’s set up some notations, shall we?

It is worth mentioning, the reason that I exchanged maximum instead of suprema is merely because suprema of a continuous function will be achieved on a compact set. This norm is a measure of how much a vector can be dialated through the linear transform \(x \mapsto Ax\) in the worst case.

Definition. An unbiased random variable \(X\) is called \(\sigma^2\)-subgaussian if one of the following holds.1 Moreover, all the statements are equivalent with different constants:

In a nutshell, this property is roughly saying that the random variable behaves like a normal and it is desirable since it’s basically equivalent to concentration around mean (or median). For fixed vectors \(u \in \mathbf{S}^{n-1}, v \in \mathbf{S}^{m-1}\) one can easily check that \(X_{u,v} = \langle u,Av \rangle\) is also sub-gaussian with the same parameter of entries of \(A\), thus concentrated around it’s mean. However, it’s not clear what can be said about suprema of this collection of random variables which is the quantity of interest.2 Note that these random variables are locally correlated, i.e. for a pair \((u^{'},v^{'})\) close to \((u,v)\) we expect \(X_{u,v}\) to be close to \(X_{u^{'},v^{'}}\). More precisely, one can write: \[ |X_{u,v} - X_{u^{'}, v^{'}}| \le |X_{u,v} - X_{u^{'}, v}| + |X_{u^{'},v} - X_{u^{'}, v^{'}}| \le ||A||_{op}(||u-u^{'}|| + ||v-v^{'}||) \] Surprisingly, the inverse is also true meaning if one take two pairs far apart from each other the corrseponding random variables will also be uncorrelated, thus behave as though they were independent since uncorrelatedness is equivalent to independence in gaussian fields. This sort of argument motivated proofs based on \(\epsilon\)-net methods which I do not intend to go through here, however the intuition is very insightful. In order to make this statement more precise one may use the following comparison inequality for gaussian random variables.

Before we continue, we need to introduce a powerful tool which is widely used in the literature of measure concentration. Suppose \(\gamma_{n}\) is \(n\)-dimensional Gaussian measure where expectation is deonted by \(\gamma_{n}f = \mathbb{E}_{\gamma_n}[f]\) for \(f:\mathbb{R}^n \mapsto \mathbb{R}\). Then Poincaré’s inequality suggest that functions with small local variations should expect small variances. In other words, some sort of gradient of the function as an indication of local fluctuation can be translated into a bound on global fluctuation. \[ Var(f) \le \mathbb{E}[|| \nabla f ||_2^2] \] This mainly suggest that one should expect dimension-independent concentration bounds for Lipschitz functions.

Theorem. Suppose \(f:\mathbb{R}^n \mapsto \mathbb{R}\) is a \(\kappa\)-Lipschitz function. Then, we have the following concentration inequality: \[ \gamma_{n}\{|f - \gamma_n f | \ge t \} \le 2 e^{-\frac{t^2}{2 \kappa^2}}\] There are in fact many ways to approach this problem namely Interpolation Method due to Pisier-Mauray, Smart Path due to Talagrand, Isoperimetry due to Borell and Sudakov, Transporation Method due to Marton, etc.4 However, I will provide a neat proof usng Stochastic Calculus which is mathematically beautiful but may seem like a magical juggling performed by the very Brownian Motion! Honestly, I get super excited whenever Brownian Motion comes up and it almost never disappoints.

Subsequently, This theorem allows us to derive dimension-independent concentration for spectral norm based on the fact that it is a 1-Lipschitz function.6 Note that this inequality is in fact sharp for the special case of linear functions in the sense that RHS is the asymptotic tail of \(\mathcal{N}(0, \kappa^2)\), though this sharpness might drop for some other class of Lipschitz functions. An immediate implication of this theorem is that the variance of \(f\) is bounded above by \(\kappa^2\) but what happens as we change the dimensions? One way for testing sharpness is via finding true order of the variance and see if it’s bounded below by a constant or shrinks toward zero as \(n\) increases. In most of the cases, actually variance vanishes to zero! This phenomena is usually referred to as Superconcentration7 which provides novel methods to compute true order of the variance with respect to \(n\). All this, arise the question of how does the variance of spectral norm behaves? In the following I intend to specify some results surrounding this question without providing a proof. As an illuminating example, we may take a look at maximum of a gaussian vector which is a special case of the problem at hand.

Finite Maximum Over a Gaussian Vector

Even though the concentration theorem suggest that \(X^{(n)}\) is \(\sigma\)-subgaussian however it’s sharpness is merely contingent upon Poincare’s inequality being unbeatable. In fact Talagrand8 proved an extention of Poincare’s inequality which provides a sufficient condition on how to beat it. In particular, the case of maximum over independent gaussians satisfy this condition thus concludes the following bound: \[ Var(X^{(n)}) \asymp \frac{1}{\log(n)} \] Below is a simple simulation study with 1000 replications for each \(n\) (between 10 to 100) which verifies the theoretical results. 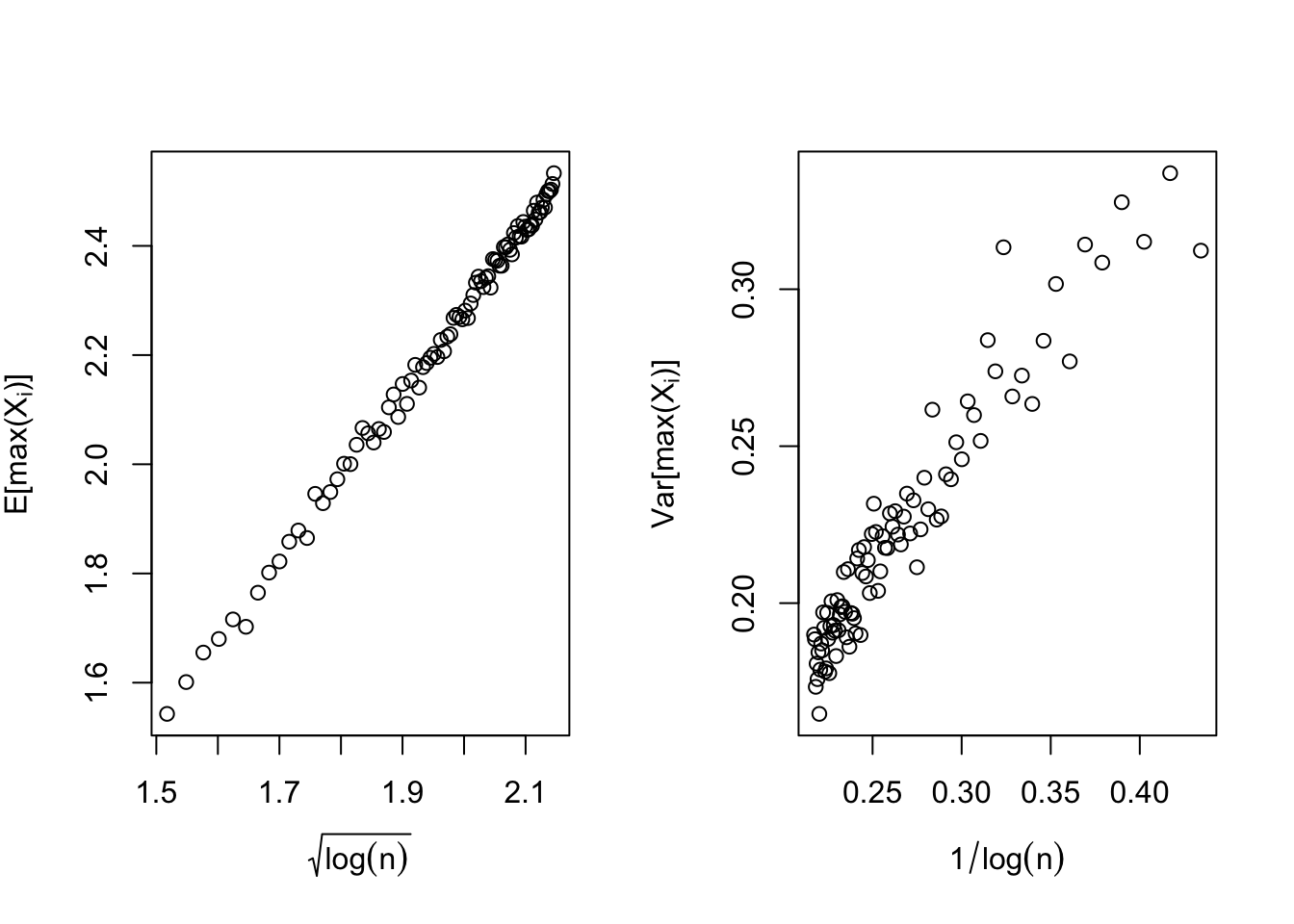 Thus far we proved \(||A||_{op}\) is 1-subgaussian, moreover its variance is bounded by one in the case of standard normal entries due to the fact that it’s 1-Lipschitz. However the following simulation indicates that spectral norm enjoys superconcentration and its variance behaves roughly as \((\sqrt{n} +\sqrt{m})(1/\sqrt{n} + 1/\sqrt{m})^{\frac{1}{3}}\), thus Lipschitz concentration once again has failed to capture the underlying truth!9 In this simulation \(m=n\) and the variance was estimated over 1000 replications. Note that the slope of the line should be close to \(-\frac{1}{3}\). 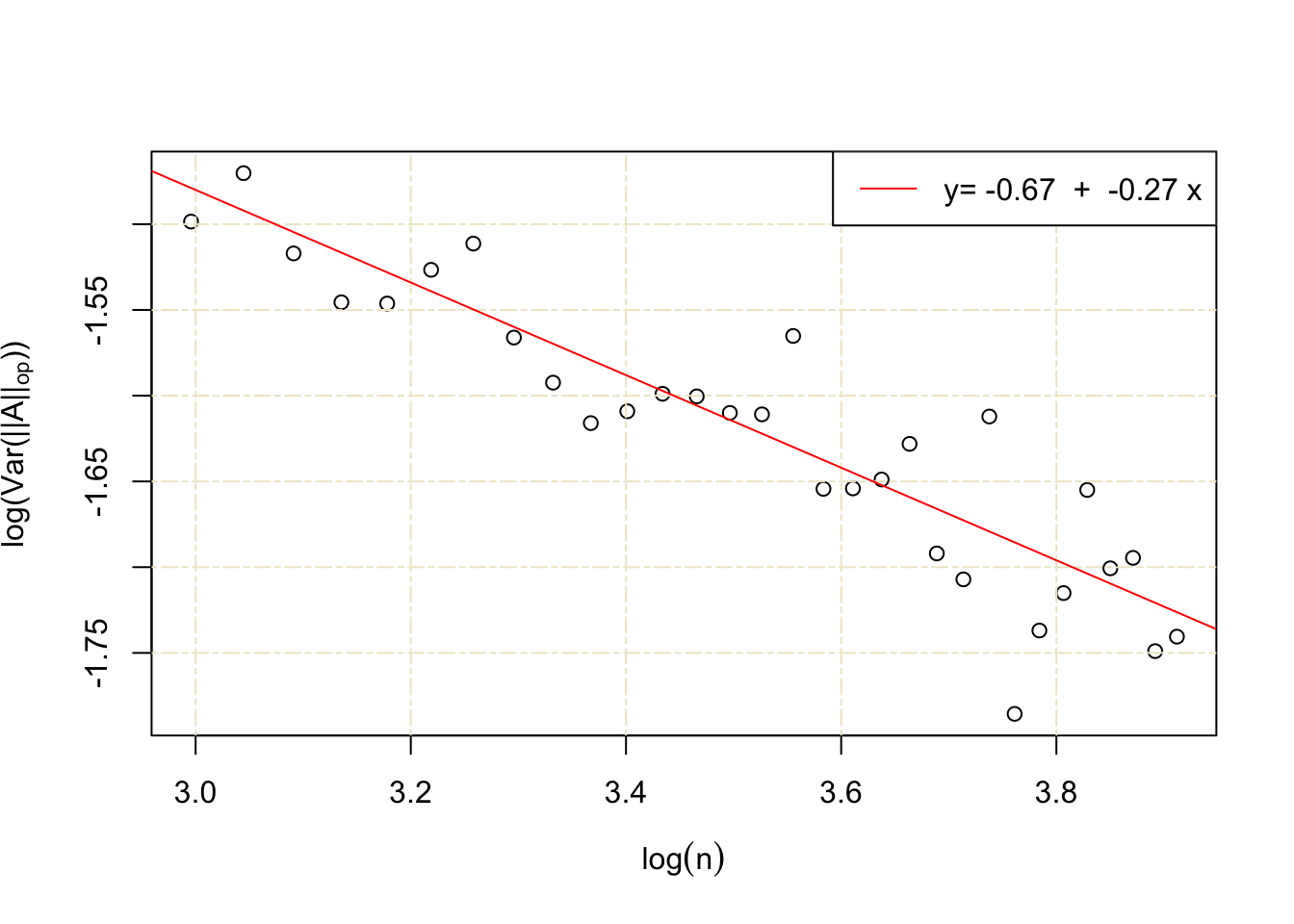 It demands much more theory to prove this variance bound which I personally believe is one of the cases that the amount of effort that should be invested into proving it does not pay off proportionally!